BEKAL FORT - ONE OF BEAUTIFUL FORT ALONG ARABIAN SEA 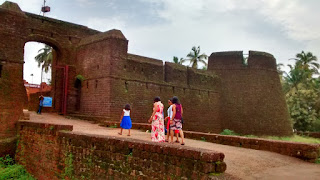 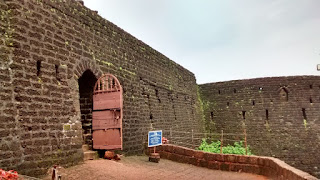 It's a good place for nature & history lovers apart from this for lovers it rewinds back to the blockbuster song of Hindi/Tamil  movie from Bombay- "thu hi re .....there bina me kese jiyu " this song completely has been shot here.

Bekal/Bekala  fort is one of the largest fort in kerala of India, it's situated at Bekal village in kasargod district. 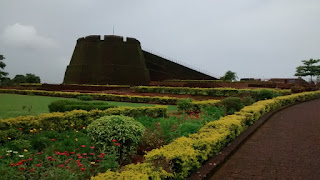 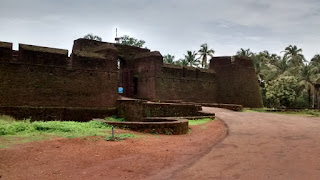 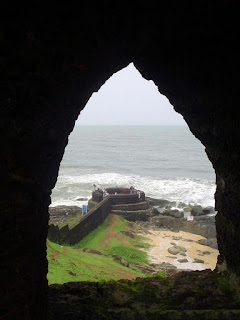 It's around 65kms from Mangalore city & it's nearest international airport connecting this historical fort.There is a plenty of buses will connect to this place from kasargod town & bekal fort railway station is nearest railway station of pallikere it comes Southern railway zone of Indian railways.

Fort was build by using laterite stones, mortar & limestone with beautiful architecture. This magnificent fort was build by Shivappa Nayaka of keladi dynasty in 16th century & was an important maritime port of Tulunadu & Malabar region.
After battle of Talikota the Vijayanagara region decline & their one of feudals Keladi nayakas arised the importance of bekal fort they build magnificaint forts of Bekal, Mangalore, Manjeswaram,Barkur, Bhatkala & this nayakas controlled the present regions of Shimoga, Dakshina kannada, Parts of kasargod & North Kannada districts.

This fort was mainly built to strengthen the naval power to overcome the conflict between European powers.There is a big watch tower at centre of fort which offers a scenic view of coastline.
"Mukhya prana Sri Hanuman temple" you can see while entering this fort on wall you can see the kannada words , as this temple was also built by Keladi nayakas , Lord hanuman will be presided in any forts build by Vijayanagara dynsaty & their feudal dynasties .As this Deity was the protector of fort & the symbol of strength.

inside fort where they will keep maximum ammunition at the time war or any endanger nears. 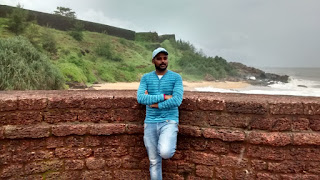 One thing you should definitely taste the Uppilitta manga (Salted sliced raw mango in brine) there are lot of street vendors selling at entrance of fort this will make you mouth watering.😜

After back from bekal fort with full memories of history,Architecture, beautiful mighty Arabian sea & move to local tea shop to have my favourite snack with Black tea (Kattan chaya)😊

Hope you enjoyed this blog &  provide  your valuable feedback about this blog & awaiting your replies.....😊